At KeyToCasino, we monitor the currency options offered by casinos across the globe and record historic trends. We found that 78 percent of online casinos in the world offer the Euro as a currency option for their customers.

The euro in first place

When a player signs up to an online casino, one of the things they must do is select a currency option. Most online casinos offer multiple options, regardless of the location of their target market. The objective of the casinos is to make it as easy as possible for the user to set up, fund, and manage their account. This means giving them the currency options that they are most likely to use. 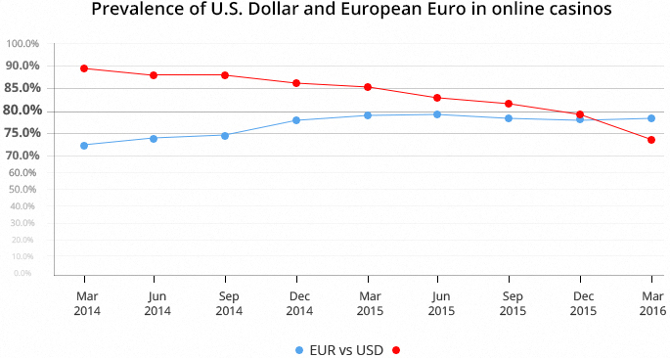 The fall in the US Dollar's popularity - and the rise of the Euro - comes as a result of several factors, including the adoption of the Euro by new countries in recent years. Another significant factor was the introduction of the Unlawful Internet Gambling Enforcement Act (UIGEA) in the US in 2006. It is a complex piece of legislation but it effectively banned most forms of online gambling in the United States.

Before then, the US was one of the most attractive and sought-after markets for online casinos. Many of them targeted that market, and therefore offered the US Dollar as an option.

However, this was beneficial to more than just American players. It also gave people from other countries with unstable currencies a solid and reliable way to manage their online casino account.

After the UIGEA was passed, the vast majority of online casinos left the US market. Those casinos, however, have been slow to turn off their US Dollar option. There was no legal requirement to do so, and keeping it meant their non-US customers could still use the US Dollar if they wanted.

It has now been 10 years since the introduction of the UIGEA, and many new online casinos have opened in that time. As they are not able to target the US market and there are alternative currencies available, many of them have not included US Dollars as an option.

The main alternative is the Euro. It is the second most important currency in the world, behind the US Dollar. One-fifth of global foreign exchange holdings are held in Euros, and it is the second most actively traded currency on foreign exchange markets. Many countries now also link their currencies to the Euro in much the same way that countries have historically done with the US Dollar.

As a result, the Euro is now the most popular currency option available to online casino players.

While the Euro has surpassed the US Dollar, American currency still remains the second most common option that online casinos offer to their users. Third on the list is the British Pound, which is offered by over 58 percent of casinos. That is not surprising, given the popularity of online casinos in the UK, and the fact that the British Pound is one of the world's leading currencies.

Two other leading currencies are absent from the top of the list of online casino currency options - Chinese Yuan and the Japanese Yen. While these are countries with large populations and leading global currencies, online casinos are not very popular there.

Behind the leading three ‒ the Euro, US Dollar, and British Pound ‒ are currencies from countries where online casinos are popular. The Australian Dollar is in fourth position, while the Canadian dollar is in fifth. 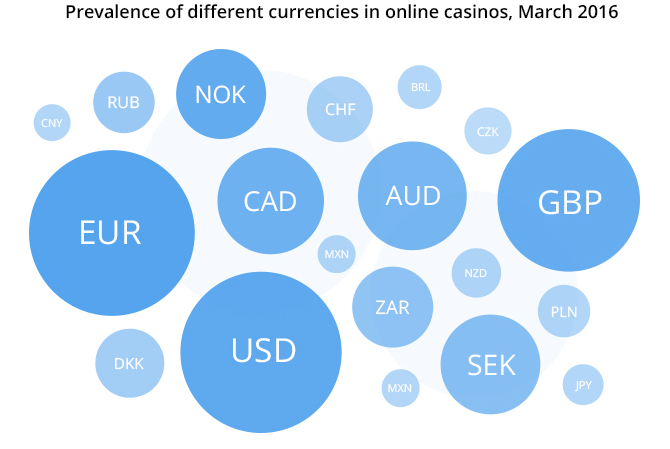 Currencies from Scandinavian countries also appear in the top 10 of the most common currency options, despite these countries having relatively small populations. They are in the top 10 largely due to the fact that online casinos are so popular in those countries. These countries include Sweden (Swedish Krona), Norway (Norwegian Krone), Denmark (Danish Krone), and Switzerland (Swiss Franc).

The South African Rand is also one of the top 10 most common currency options.

Who is up and who is down?

Between 2014 and 2016, the currency that saw the biggest increase in prevalence was the Euro, while the US Dollar saw the biggest fall. That is expected, as they are easily the most popular currency options in the world's online casinos; even though the US Dollar is second on the popularity list, it is still offered as an option in almost 74 percent of online casinos.

What about the other winners and losers though? The Russian Rouble had the second biggest increase behind the Euro. It is now offered as an option in over 10 percent of the world's casinos, despite the recent downturn in the Russian economy. This could be due to the fact that unlike the stock markets, the casinos do not immediately react to the economical factors.

The other biggest gainers were the South African Rand, Norwegian Krone, and South Korean Won. These three countries are areas where some casinos see the potential for growth, given their keen markets and workable regulatory systems.

The reasons for the falls are varied. For instance, when casinos left the US market because of the UIGEA, they exited North America completely, which means Canada was also affected. Furthermore, there is uncertainty in Canada as to the legal position of online casinos. In the UK, there was a change to regulations and increased taxation, which prompted some online casinos to leave that market. In Denmark, heavy regulation is also affecting the industry. The situation in Switzerland is less clear, but we will continue to monitor the trends.

Analysing a large and fluid market like online casinos is not an exact science, and the sample can never be 100 percent perfect. However, when the data is looked at over time (in this case between 2014 and 2016), it does give a clear indication of patterns and trends – the current strength and popularity of online casinos in the European market, for example, and the continuing shift of focus by online casinos away from the American market, where laws are prohibitive, to new markets with growth potential.

Materials included in this document are available for general use. Publication of the research and the enclosed figures is allowed, provided that a link to the KeyToCasino website is included in the publication.