Over 50 percent of the world's population is banned from accessing online casinos in their own countries. On the other hand, over 60 countries around the world license online gambling which allows their citizens to bet. This is according to new research. It found that the situation in terms of gambling availability varies greatly from country to country.

In some countries casinos of any type, either land-based or online, are banned, while in others they are allowed. In those countries where casinos are allowed some ban local companies from operating a casino, while foreign firms continue to trade. Quirky rules also exist. For example, some countries ban their citizens from casinos but allow visitors play, and in at least one country casinos are only available to people who earn a high enough salary.

The research was carried by the KeyToCasino research team. The authors analyzed the gambling laws in 225 countries and territories by looking at a range of sources in 46 different languages. The sources in each of the countries where the information was collated varied:

Thus, for the 95 percent of the countries, or 98 percent of the world population, the information came from local, reputable sources. All of the underlying data and the sources are available on the following page. The report is based on the data as of March 1st, 2015. The tables, however, are constantly updated to reflect the current position of casino and gambling availability around the world.

In conducting the research, KeyToCasino team wanted to give a snapshot of the state of global regulations on casinos, and the different barriers faced by players around the world.

Regulations governing gambling have been enforced by governments and leaders for almost as long as gambling has existed. This goes all the way back to ancient Chinese and Roman societies. The modern casino, as we know it today, has its origins in the 17th century Europe. It was called the Il Ridotto and it was located in Venice in Italy. It opened in 1638 and facilitated gambling during the carnival season, under control by the Italian government.

Today almost every country in the world has its own gambling laws, although in some places gambling is not regulated at all. In many countries the industry is controlled through licensing and supervision, but there are some places where gambling is completely forbidden.

Land-based casinos have been in existence longer than online casinos, so in most countries the laws regarding their operation are much more established. Of the countries researched, 74 apply restrictions to land-based casinos:

That leaves 151 countries (or 67 percent) where casinos are fully legal. But this doesn't tell the whole story as only 47 percent of the world's population can access the casinos in their own countries.

The situation with online casinos is more mixed. This is because of the way countries treat local operators and foreign operators, which in some cases is very different. Some form of ban is in place for 56 percent of the world's population. 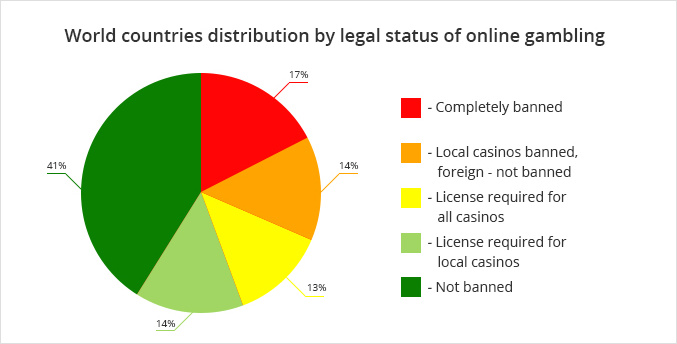 Citizens who live in 57 countries around the world do not have the facility to bet in land-based casinos. Can they bet online? 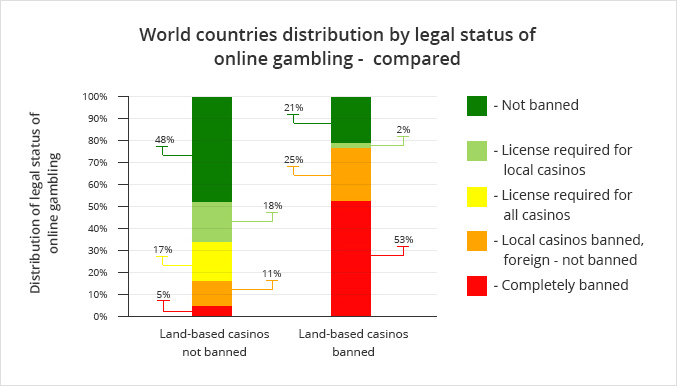 On the Players' Side of the Table

In 132 countries where online gambling operators are banned or restricted , what happens to the ordinary people who place bets online?

Some countries make an additional effort to prevent their citizens from placing illegal online bets.

How the Casinos Operate

The laws and regulations do not always reflect the reality of how certain casinos operate. Some casinos claim to operate in countries where there are restrictions, while other casinos voluntarily restrict access to citizens of certain countries, even though there is no legal reason for doing so. Most do this for marketing or business reasons.

The researchers conducted this part of the project by getting 655 online casinos to give them a list of countries where their services are restricted either by local laws, or voluntary restriction.

The results are interesting: 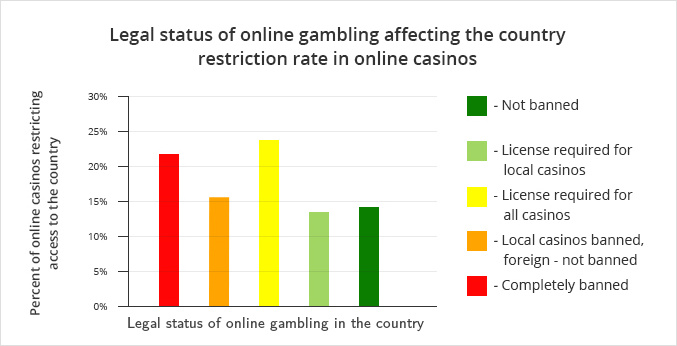 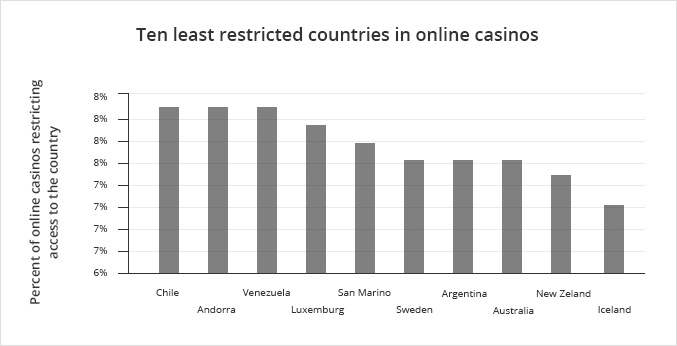 To help individuals to navigate this complex picture, KeyToCasino combined all research results discussed in this document and scored every country. The resulting number was called Gambling Availability Score.

Each country can score a maximum of 1000 points. The scoring is based on six different factors:

When all of this is collated together it provides a combination of the position of a country’s government towards online gambling and the attitude of the online casinos towards that country.

According to the Gambling Availability Score, the United States is the worst country for online gamblers to live in. It scored just 311 points out of 1,000. Iran and France are the next two worst, scoring 407 and 412 respectively. 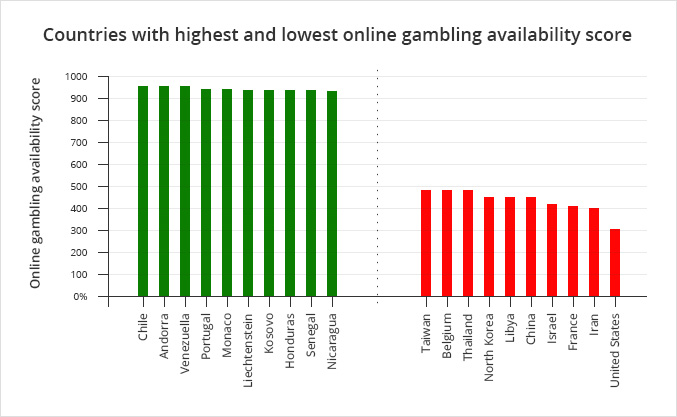 The countries that get the best scores are Chile, Andorra, and Venezuela. They each score 960 out of a possible 1,000. Your country's current score is available on the following page.

It should be noted that the score does not take into account the internet accessibility in each of the countries. Many of the countries in the top 10 have low rates of internet access. This means that while their citizens might have good access to online gambling, not many of them probably do because of their limited access to the internet. The Gambling Availability Score reflects opportunity and convenience in regards to online gambling, rather than the casino usage rate.

Did you know that...

Here are some interesting facts that the authors have found during their legal research:

The information, figures and materials included in this document and this research are available for general use. Publication of the research and the figures is allowed, provided a link to the KeyToCasino website is included in the publication.