USA Betting Industry Set for the Biggest Shake Up in Decades

In May of 2018, the Supreme Court of America put an end to a long chain of appeals and legal disputes, by a 6-3 ruling enabling sports betting in 47 states. This decision lifted a 26-year-old ban implemented by The Professional and Amateur Sports Protection Act (this document, also known as PASPA, allowed sports betting only in four states – an exemption as the “grandfather clause”, and out of these four, only in Nevada was an individual able to wager on the results of a single game). With it, the ruling also opened the US economy to the biggest shake up in its sports betting history, introducing it to both challenges and opportunities.

The battle against PASPA was initiated by the state of New Jersey back in 2012, and as the events unfolded, over ten other states and, subsequently, the American Gaming Association, joined together, arguing that the time has come to proclaim the old piece of legislation as unconstitutional. The AGA also argued that while PASPA was in place, black markets prospered, with up to US 150 billion worth of bets placed by the Americans illegally each year.

…while The Professional and Amateur Sports Protection Act was in place, black markets prospered, with up to US 150 billion worth of bets placed by the Americans illegally each year. 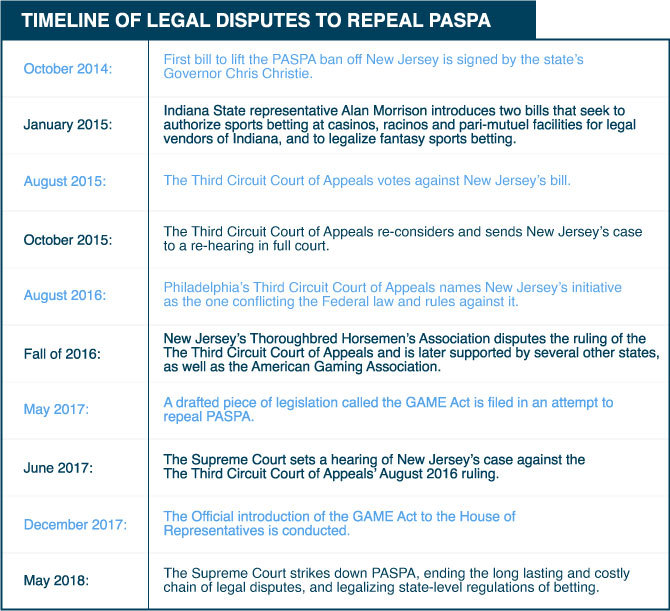 According to data, provided by H2GC, in 2017, before the the historic repeal of PASPA, America generated a US 200 million gross win on regulated sports betting. This placed the country 7th among the world markets, with the United Kingdom being the indisputable leader and reporting US 3.05 billion, and Italy and France entering the TOP-3 with US 1.84 and US 1.15 billion worth of revenues. 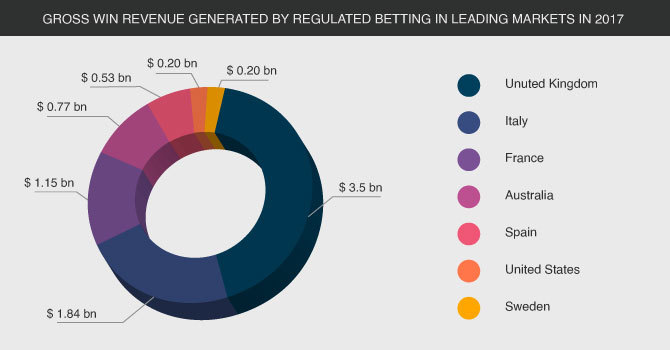 Just a couple months after the 26-year-old piece of legislation was struck down, Delaware, New Jersey, Mississippi and West Virginia passed bills that would legalize the new practice. These four were followed by Pennsylvania, Rhode Island and New York. With more and more states currently exploring the post-PASPA market and joining the list of territories with legal betting, by 2023 analysts predict dramatic changes to the abovementioned leaderboard. In it, America will be first, with up to 19 states predicted to have legalized betting, and the in-country regulated market generating up to US 7.6 billion worth of gross wins.

Analysts predict up to 19 states to legalize betting by 2023, with in-country markets then generating up to US 7.6 billion worth of gross wins. 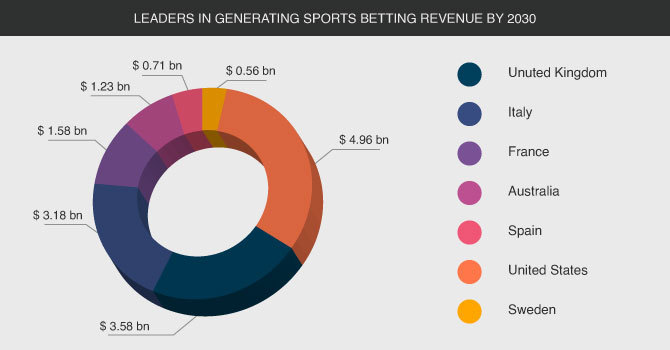 Specialists also predict that by 2030 Nevada, currently first in the national reports to generate revenue in this segment, would drop to the 7th position, letting California, New York, New Jersey, Massachusetts, Illinois, and Michigan move ahead. There will also be significant changes in the behavior of bettors. Currently, more than 80% of bets are placed in land-based venues, but in less than a five years, more than half of the bets will be submitted online, via mobile phones.

Currently, more than 80% of bets are placed in land-based venues, but in less than a five years more than half of the bets will be submitted online, via mobile phones.

What Does It Change for Domestic Major League Sports?

Interestingly, in 2012 it was the four major US leagues that united to suppress New Jersey in its legal battles against PASPA. They would argue that a potential repeal would hurt the integrity of the games. At the same time, out of 45,000 NFL fans surveyed by the AGA, more than a half voted in favor of state-level legalization of sports betting. People admitted that they would even watch the games more eagerly and with greater interest.

Out of 45,000 NFL fans surveyed by AGA more than a half voted in favor of state-level legalization of sports betting

This people’s vote is supported by some of the more current polling. It indicates that prior to May of 2018 more than 90% of bets were placed on the domestic sports leagues, and this would not change. Moreover, it would yield millions of dollars of advantages for the USA sports teams – up to US 2.4 billion to NFL alone, to be more specific.

By 2023, H2GC predicts, around 37% of the market’s betting share would belong to American football. Up to 32% would be won by basketball, and this would place baseball third with a 23% share. Around 7% would go to other types of sports.

What Does It Mean for the International Market?

Not only the US states were quick to react to the May 2018 ruling. Some leading European sports betting brands found interest in the post-PASPA economy. The United Kingdom was the one to be particularly keen on striking new deals.

While reports from 2017 placed it first as the leader of generating betting revenues in the international arena, the UK vendors were struggling after the government cut the maximum stake on fixed-odds betting terminals from GBP 100 to GBP 2. These machines contributed half of the income for the country’s bookmakers, and the battle lost to the ministers who decided to take a stand, leaving many seeking alternatives.

Paddy Power Betfair was the first to vote in favor of the overseas investment. By the end of that same historic May of 2018, the company struck a deal with the US daily fantasy sports company FanDuel, buying out 61% of the controlling stake. In July, another major label, GVC Holdings (the owner of Ladbrokes and Coral) inked a US 200 million deal with MGM Resorts, America’s biggest casino operator. They joined forces with years of experience in sports betting, represented by GVC Holdings, and a mogul of the gaming industry MGM Resorts will potentially contribute to creating new and innovative US betting segments, predicts The Guardian.

As the new rules are being set, the offshore Sportsbook providers remain relatively calm. Legalized in-country bookmakers will introduce a challenging competition, but some of the most popular out-of-States gambling brands have more than a decade of experience and a solid reputation among their regulars. For what it is worth, some even hope that betting finally losing its taboo status and more and more people going online to place bids would generate bigger traffic to established and well-oiled offshore online operators.