It is not uncommon for players to experience problems due to rogue casino practices, such as delayed payment, misleading bonus offers, tricky terms, and others.  Many of these problems could be prevented by studying casino reviews at a trustful source before registering at a casino.  On the other hand, when the arguments between a player and a casino do appear, they often require a mediation of the third party.

The first thing that comes to mind when the player faces a problem with the casino is to complain to a licensing authority. However, not all licensors accept complaints or make every effort to solve them.  Another option that the players might consider for submitting their complaints is watchdogs. Yet even the top watchdogs, such as eCOGRA and IBAS accept complaints for a limited number of casinos. For eCOGRA this number is 88 out of the 647 casinos listed in our database. After exhausting all other possibilities, many players seek justice at various forums at gambling portals and directories, but not many of those can help. Among gambling portals that mediate disputes between the players and casinos, the absolute leader is AskGamblers, accepting complaints for more than 500 casinos. 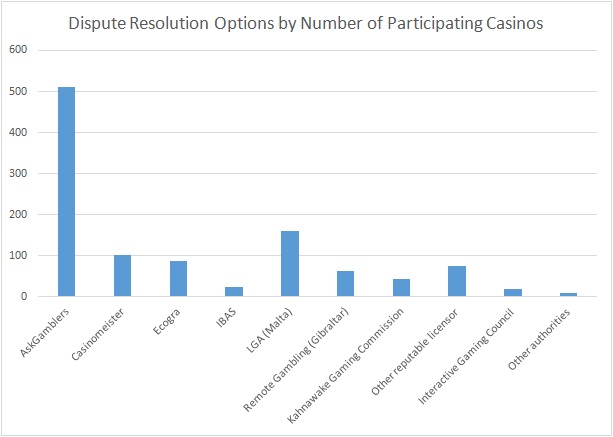 One of the most trusted gambling portals on the web, AskGamblers has been serving its customers since 2006.  In 2010 the company launched Complaints Service that quickly gained popularity among players. More than 8,000 complaints have been submitted since then, although around 5,000 have been accepted. Delayed payment has been the absolutely most common reason for submitting a complaint. The disputed amount ranged from $25 to over $110,000 in a single case. Sixty percent of the total complaints were successfully resolved.  As a result, over 2 million dollars were returned to players.